In celebration of Adidas’ commitment to making the future of sport as inclusive as possible, they revealed the world’s first-ever liquid billboard on Kite Beach, Dubai.

On the 24th of June, ladies were invited to take a plunge “Beyond the Surface” wearing pieces from the new Burkini collection which aims to offer a greater choice of swim apparel for all.

Amrith Gopinath, Senior Brand Director Adidas GCC said: “Our belief is that nobody should be prevented from enjoying the benefits of being in and around the water, hence the recent launch of our diversified product offering for all women and our Burkini Collection.” 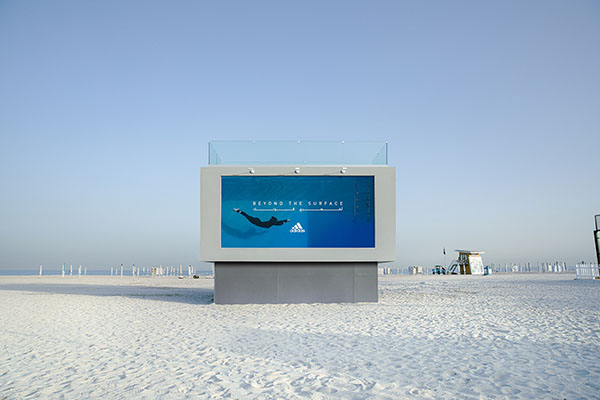 Adidas commissioned a YouGov survey in 2021 which revealed that only 12% of women in the UAE feel comfortable wearing a swimsuit at a public beach or pool. The main reasons for this are body shaming and a lack of privacy. Following this, Adidas has taken steps to reduce this feeling amongst women.

Previously, Havas Middle East released a video campaign for Adidas introducing the new inclusive swimwear collection. They also highlighted the power of water and its ability to embrace all people regardless of shape, ability, or religion. The most recent swimmable billboard stunt reinforces the messages put across in the video campaign, encouraging women to feel confident in the water.

Triathlete and Guinness World Record holder, Dareen Barbar, as well as Adidas ambassador and the first Saudi Arabian female to climb Everest, Raha Moharrak were amongst those asked to dive into the 3-metre deep and 5-metre high pool.

The billboard fits 3,319 Adidas shoe boxes and can hold 11,500 gallons of water! Made of reinforced transparent acrylic, the creation took a full 3 weeks and a team of 32 to build.

Shoppers at the Dubai mall were also able to enjoy the experience as clips of swimmers in the liquid billboard were projected onto a digital screen next to the Adidas flagship store.