Burger King France is really nice to its loyal customers, it seems! It has given an incredible Christmas gift to its biggest Facebook fan, Sullyvan, who has posted more than 600 comments on Burger King’s Facebook page. So, to thank him, the brand turned the nearest Burger King to Sullyvan’s home in Bordeaux into “his” restaurant. 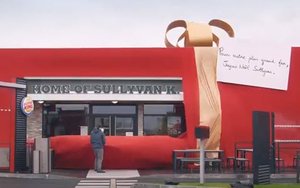 The building was wrapped with a massive bow and a gift card reading “For our best fan, Merry Christmas, Sullyvan.” The brand also named the restaurant after Sullyvan, with large letters installed above the doors saying, ‘Home of Sullyvan K.’

They captured Sullyvan’s adorable reaction on video for everyone to enjoy, which follows him seeing the restaurant for the first time, as well as his very own table, parking space, plastic tray, Whopper box and napkins, all of which had his name on.

If that wasn’t enough, he now has a card that entitles him to free meals at the Burger King whenever the urge strikes, and he can bring guests with him to also eat for free!

The end of the video shows another competition Burger King is doing – the fan who posts the most comments under the video (which is embedded on Burger King’s Facebook page, as well as featured on YouTube) will receive a year’s worth of free Burger King. Get commenting!!

This is a really sweet PR campaign, and you can tell by Sullyvan’s reaction that it means a lot to him. Burger King have really put a lot of thought into this gift and pulled at the heartstrings of its customers, well done Burger King – I very nearly cried at how cute this is.

ALL Behind the Campaign Entertainment Food & Drink Other