Whether or not you’re a BBC Radio 4 fan, you can’t have failed to hear about the domestic violence storyline running through The Archers over the past few months.

Having worked with the charity, Refuge, for consultancy on the storyline, the producers have expertly told the story of Helen and her experiences – both mental and physical – at the hands of her husband Rob, breaking the taboo of domestic violence in the meantime.

And as stats reveal that two women a week are killed by their partner or ex-partner in England and Wales, Refuge haven’t just stopped at the consultancy, they’ve gone full throttle to piggyback the storyline and impact on social behaviour.

Newsjacking the soap at every opportunity, the charity have cleverly jumped on the campaign to help those who might be experiencing the storyline in reality. From actively sharing info and links during the soap’s air-time, encouraging celebrities to socially support the storyline, providing immediate comment to media, including The Guardian and BBC Woman’s Hour, or supporting fan’s JustGiving sites, Refuge have placed themselves at the centre of the story – a strategy which has resulted in widespread media coverage for the charity and soap.

And a result, there has been a significant shift in behaviour. The charity reported a 17% increase in calls during February, and ‘The Helen Titchener (nee Archer) Rescue Fund’ JustGiving page, set up by an Archers fan to raise money for Refuge, has so far received over £131k to date. 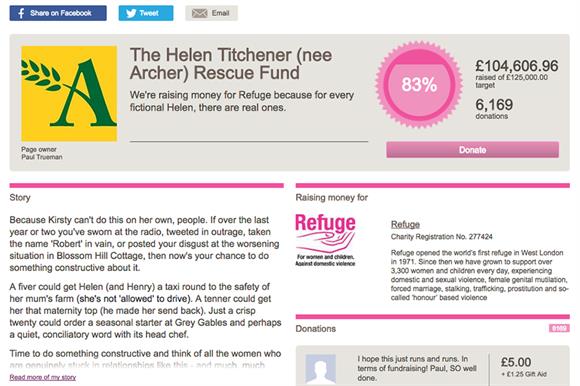 Yet the money raised is a side-line when looking at results. With one in four women experiencing domestic violence at some point in their lives, the real value can be seen by the huge awareness drive created by continual newsjacking has undoubtedly helped the community it is trying to reach out to.

The campaign has demonstrated in an extraordinary way how newsjacking trending topics can play a vital part in charity comms strategies. Whilst charities have worked closely with production companies for decades for advice and consultancy (something I was pleased to see from my own time working in the EastEnders press office), Refuge have cleverly placed themselves at the centre of The Archers storyline, all the while staying grateful to the soap and its fans for activity promoting the issue and dismissing the taboo. 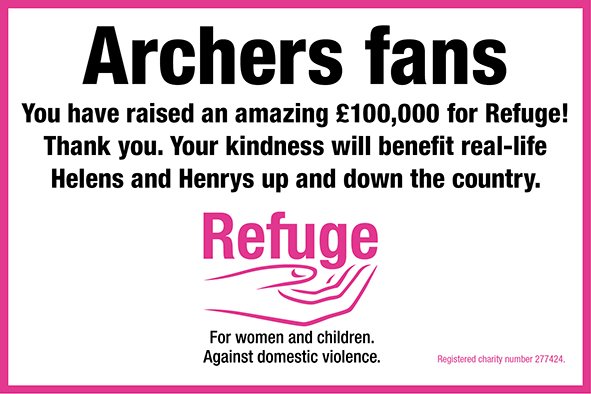 Issues reflected in TV dramas, soaps and radio programmes already have an existing, widespread and prime audience, and tapping into this audience through the media and across Twitter and Facebook means those who are most likely to share content relating to the topic are easily accessible.

So whether it’s Phil’s alcohol addiction in EastEnders or the real life case studies seen in the recent Louis Theroux documentary, stress & depression in the Emergency Services (Line of Duty/Undercover) or autism in children (The A Word), there are prime opportunities every day. Charities just need to be willing to include newsjacking as part of their strategy.