Kraft Heinz Canada has joined in with the Oscars conversation with a campaign highlighting a truly iconic star’s role in the film industry.

Heinz Ketchup has appeared in hundreds of films yet has never been nominated, let alone recognised, for its impressive contribution.

100’s of film appearances, 0 nominations. Find a movie featuring Heinz Ketchup and tell us in the comments below for a chance to win 1 of 1000 bottles of free ketchup.

To raise awareness for the overlooked actor, Heinz and agency Rethink created an IMDB page recording all the movie cameos the condiment has made over the years.

The page was quickly taken down by the site which was seen as an unjust snub. With awards snubs being a hotly debated topic, they took to social media to rally fans for support. 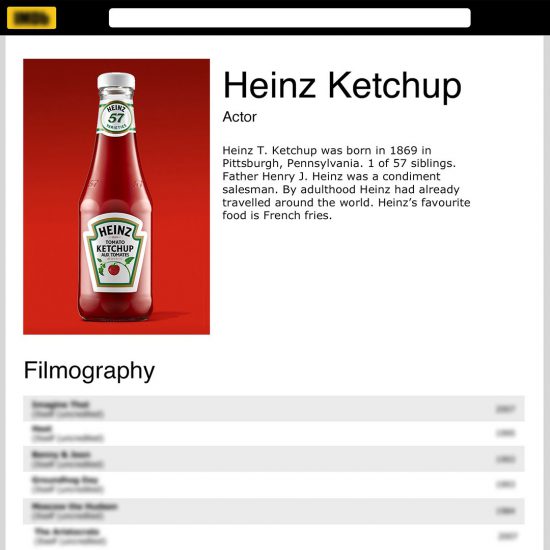 Fans were asked to find movies featuring Heinz Ketchup and share them on their feeds, in return for free ketchup.

“Heinz is front and centre in some of the biggest movies and greatest scenes of all time,” says Rethink creative director Mike Dubrick. “If Wilson the volleyball gets in the credits, why shouldn’t Heinz?”

Indeed, Wilson’s IMDB page is not only live but boasts 2 award wins and 1 nomination.

The campaign’s massive response from fans has been inspiring, with Dubrick responding, “who knows, maybe it’s enough to convince them to put it back up.”