By Rachel McCullough on Thursday, January 30, 2020

Virgin Media hits back at competitor BT as they place provocative billboards around Bristol.

In an attempt to convert Virgin Media’s 300,000 customers in Bristol, BT placed a number of antagonizing billboards around the city which read: ‘Bristol. Don’t settle for Virgin. Get ultrafast Full Fibre with more reliable speeds than Virgin M200 and M350’

Giving as good as they got, Virgin Media reacted to the ads by parking mobile billboards in front of BT’s own. Serving their bold response, the Virgin Media ads read: ‘B******T. Our fastest average speed in Bristol is 516Mbps. That’s loads faster than BT. Enough said’ 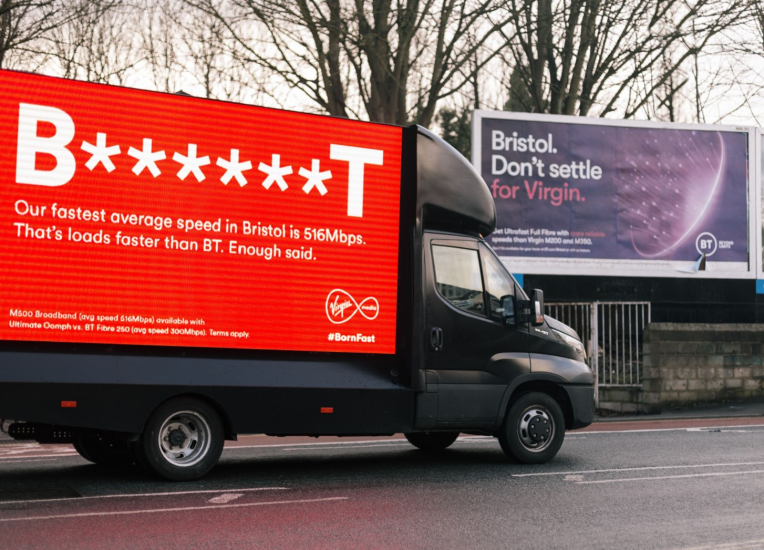 The payback appropriated Virgin Media’s #BornFast hashtag, alluding to their opinion of BT’s ‘B******T’ tactics through use witty use of asterixis – but leaving interpretation to passers-by.

Referencing the stunt, Cilesta Van Doorn, brand and marketing director at Virgin Media said: “BT’s broadband bunkum just couldn’t go unchecked. Residents of Bristol won’t be fooled by BT’s babble and we look forward to welcoming anyone who wants to experience life in the fast lane with our superior ultrafast speeds. With a reliable future-proof network that is bringing gigabit speeds to Bristol and more of the UK, Virgin Media is, as always, leading the charge – catch us if you can.” 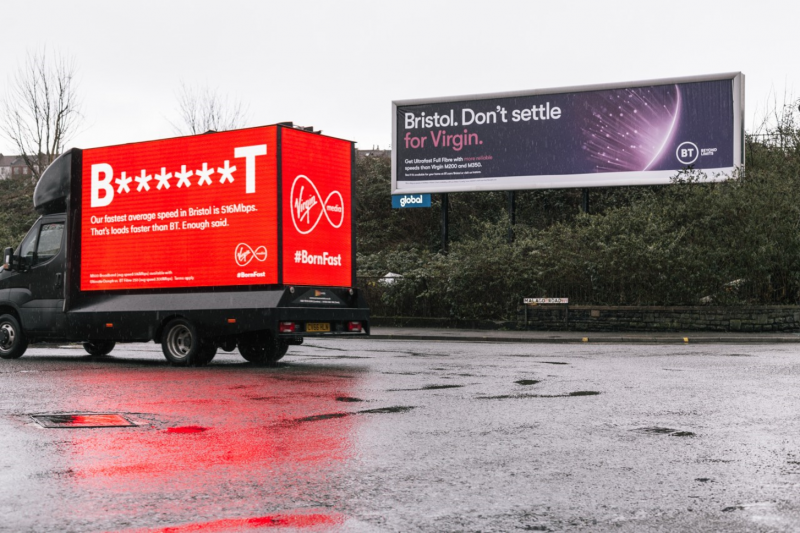 Al Mackie, chief creative officer for agency Rapp UK also said: “Virgin Media, as all the great Virgin brands, is about disrupting the market and making it better for consumers. While they have the fastest widely-available broadband in the UK they haven’t lost that challenger belief and will stand up to the dubious tactics of the other broadband providers.”

Virgin Media’s retaliation follows the news that through private investment, Virgin Media hopes to deliver more than half of the government’s broadband target by the end of 2021.