The Multivitamin and Health Supplement brand, Soglar, has teamed up with Saatchi & Saatchi to lift the mood of Brits today on the most depressing day of the year. 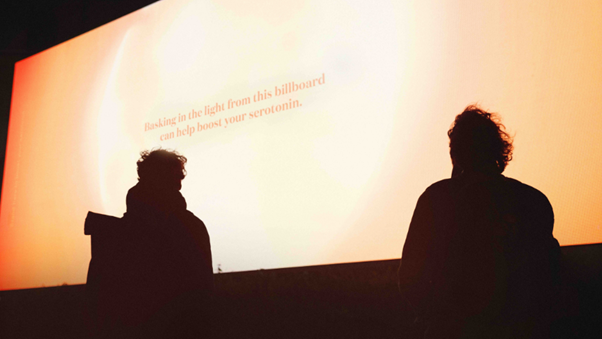 Blue Monday is the name typically given to the third Monday of January. Sky Travel introduced the concept back in 2005, where they found this day to be the most depressing day of the year.

However, this year, Soglar has enlisted the help of Saatchi & Saatchi to lift the mood of Blue Monday. The work won funding at the Ocean Outdoor Digital Competition 2022 and uses Ocean’s OOH technology in London, Manchester and Birmingham to help boost serotonin.

The billboard named Golden Lights applies S.A.D lamp-inspired, light-led creative to 12 digital billboards across the UK. Soglar encourages commuters to stand in front of the glowing billboard ‘to help boost serotonin’. It reminds them to top up their vitamin D levels particularly with Solgar’s new vegan vitamin D on these shorter, darker days. The billboard will run between 4-8pm.

“With more limited sunlight, winter is the time our natural vitamin intake may suffer, so what better way to lift spirits on the bluest day of the year than with sunlight-inspired creative? We want to give commuters a little light as darkness falls on the ‘bluest’ day of the year, and are delighted that Saatchis were able to bring this ambition to life in such a practical and unique way across the UK’s three major cities.”

“The best ads are often the ones that bring a bit of light relief but they are rarely scientifically proven to do so! Harnessing Ocean’s technology and some amazing sites across Britain to bring golden light to the nation on its most miserable day is really special and we’re basking in the joy of it.”