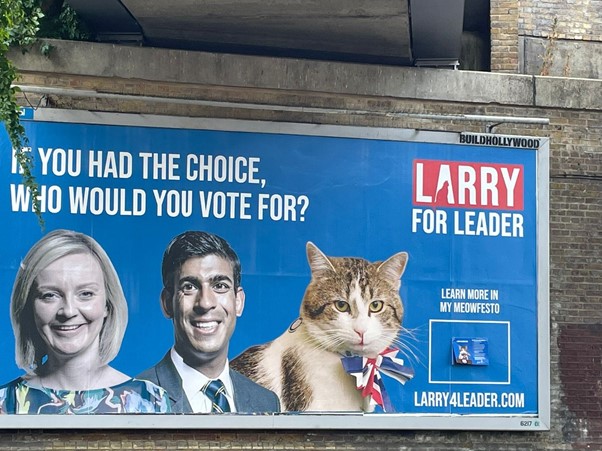 The political campaign, Larry4Leader, has circulated as the vote for the UK’s next conservative Party leader, and therefore Prime Minister, approaches. The spoof campaign puts forward Larry the Cat as the latest candidate for the position, even introducing his own website and social media to support the cause.

The website, set up by the advertising agency Don’t Panic, emphasises the absurdity of the upcoming election: “when it comes to the nation’s next leader, why do 160,000 Tories get to choose for 67 million people? (And 34 million pets)”

September 5 is when the new Prime Minister will be announced.

Time to clarify a few things:
1. I’m not “Boris Johnson’s cat”
2. Like all Prime Ministers, he’s only a temporary resident of Downing Street
3. I live here permanently. When he finally goes, I stay
4. Yes, it’s all very embarrassing but it will be over soon