Top 10 PR and marketing stunts and campaigns of May 2017

Firstly, apologies for missing a top ten post. They take quite a bit of time to put together and given everybody involved in the site does this voluntarily, I struggled to find the time! Here’s the last one we did, in case you missed it.

Secondly, since that post, my book, Myths of PR, became the best-selling PR book on Amazon. SERIOUSLY: 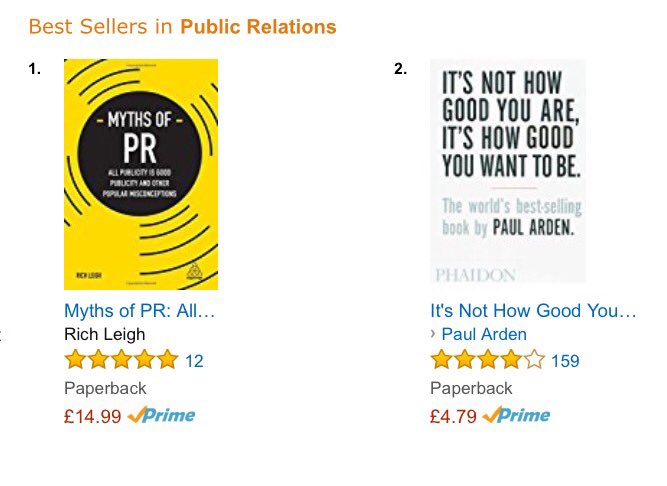 I know many of you will have been behind some of the sales and lovely reviews, so THANK YOU. It’s also just been confirmed that it will be out next year as an audio-book, having been picked up by Audible.

Thirdly – a bit of a long shot potentially, but if you have anything to do with putting events on in any way, shape or form, you might want to add your details here. We’re creating something and if you sign up, you’ll be among the first to find out about it when it’s live and good to go.

All that said, in reverse order (and based solely on the number of unique views each post received), here are the top ten PR and marketing campaigns throughout May 2017:

10. An African Grey parrot became an insurance salesman in this Czech stunt

In a recent campaign for Ceska Pojistovna, the largest insurance company in the Czech Republic, Carl – an African Grey parrot – was trained to sell pet insurance by a Hollywood animal handler.

A couple of years after the similarly executed ‘rugby ball in the wall’ stunt to mark the Rugby World Cup, a dragon has appeared atop Cardiff Castle overnight to celebrate this weekend’s Champions League final, being held in the city.

8. McDonald’s introduces the Frork to scoop up lost toppings – post by Angharad Welsh

McDonald’s has created a new utensil that finally (?) lets dinners turn their fries into a more successful scooping machine for those pesky sauce and toppings spillages.

Praise be, eh? Here’s the introductory video, which has been viewed more than 2m times.

Three 2m tall pirate statues were spotted around the British coastline this month, in a stunt from Walt Disney Studios to promote ‘Pirates of the Caribbean: Salazar’s Revenge’, which has opened in cinemas nationwide.

Green Flag, a breakdown cover provider, wanted to convey how easy it is to switch to a different provider, and what better way to do this than hypnotize a bunch of die-hard football fans?!

5. Nike and the search for a sub-two-hour marathon – post by Gemini People’s Jack Field

You probably heard about this, but if you didn’t, in a campaign that had about a billion moving parts, Nike attempted to break the 2 hour marathon.

Well worth reading through Jack’s piece about this one. Unsurprisingly top stuff from Nike.

4. Baywatch for a new generation: The Slow Mo Marathon

Ignore the beachball on the Thames effort from yesterday – this was actually a pretty decent idea done in a fun and relevant way.

Alongside some of the cast members, thousands of ‘runners’ took part in ‘the world’s first Slow Motion Marathon’ in downtown LA.

In an outdoor marketing effort during the recent Salone del Mobile in Milan – an annual furniture fair, ‘the Nescafé Hello Bench’ was unveiled. The bench got shorter when two people sat on it thanks to a couple of sensors, bringing strangers together over coffee.

As I say in the post – not sure the concept travels well, but a nice literal activation at a relevant event, nonetheless.

In their second stunt to make it into this month’s top 10, Nike created the ultimate pop-up for runners – the world’s first LED running track where you can actually race yourself.

The figure-of-eight arena takes up a whole city block in Manila and is shaped like a Nike LunarEpic running shoe. The 200 metre track is lined with LED screens which allow up to 30 runners to compete against an avatar of themselves at any one time.

1. The entire country of Sweden is now listed on Airbnb

In an effort to boost tourism, Visit Sweden has listed the entire country on Airbnb in a bid to appeal to younger travellers. It’s a brilliant campaign – here’s the profile.

Visit Sweden is trying to educate and interest people in the concept of ‘Allemansrätten’, or ‘the freedom to roam’.

‘Allemansrätten’ is a law that means that people are free to ‘camp, to hike, and explore, and to use natural resources at will’ – something anybody that lives elsewhere and has ever tried to camp might realise comes at a cost in many situations.