Cupcake bakery Crumbs and Doilies was commissioned by Japanese TV show ITTEQ  to create vanilla sponge and buttercream artwork of a cherry blossom tree – a significant symbol in Japanese culture. This was created by designer Laura Hadland. The cupcakes were prepped and baked in the Crumbs and Doilies kitchen in Wandsworth in south west London, then transported to the High Cross Shopping Centre in Leicester for the final construction which was filmed by ITTEQ. ITTEQ was behind the toast mosaic of the Mona Lisa. 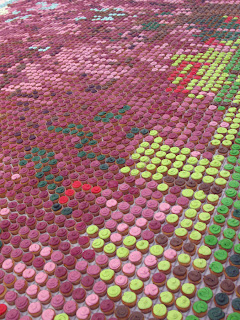