Last week Oatly released their now infamous 30 second TV spot during the Super Bowl, one of the most widely televised events in the world. It features Oatly’s CEO Toni Petersson as he takes to his keyboard to tell us about the benefits of switching to oak milk instead of cows milk.

Viewers were quick to respond to the jingle on Twitter, eager to share their opinions on what they’d just witnessed

As it happens, according to Ad Age the video was first shown back in 2014 in Sweden but was subsequently banned following a lawsuit by the country’s dairy lobby.

Despite the overwhelming negativity, Oatly has remained positive

“Maybe interrupting the second quarter so the world could experience Toni’s musical stylings about how oat milk is like milk but made for humans wasn’t the most Super Bowl-ish idea ever,” the company noted on its website. “But on the other hand, our attempt to promote Toni’s singing skills to a wider audience actually got you to visit an oat milk company website on the big day”.

As a sign of good humour the brand has now created a range of limited edition t-shirts commemorating the advert forever – all of which have now unfortunately sold out. 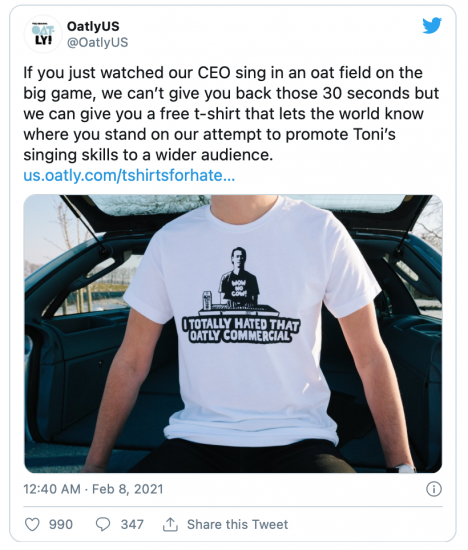 ALL Behind the Campaign Fashion Food & Drink Off the Record