Tedious, predictable and woefully unfunny are all the things that describe US comedy import ‘The Mindy Project’, a sit-com in which the protagonist Mindy Lahiri, played by Mindy Kaling, looks for love every week before ineptly nose-diving in an adorable manner (sound familiar Miranda fans?).

That said, in a rather neat, cheap and unexpectedly smart piece of mutual PR has risen from the ashes of this comedy car-crash, courtesy of partnership between FOX and scurrilous online dating app Tinder. Having announced in the US of A that they were making Tinder-themed episode for 2014, the mindless robo-droids/fans of the show, can now romantically interact with their favourite characters via an array of ‘real world’ fake Tinder profiles. 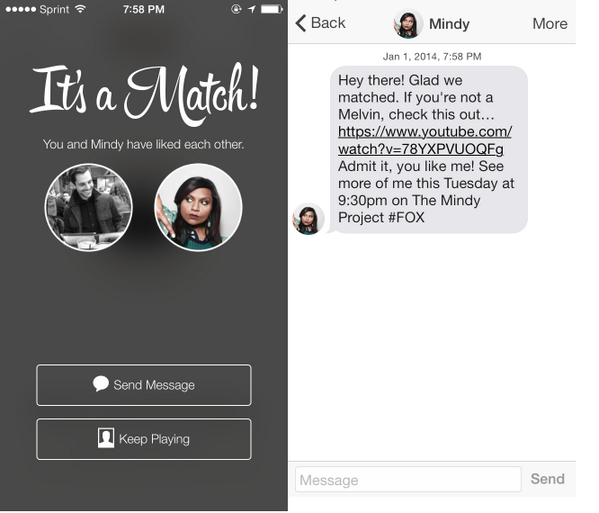 It looks like the collaboration is as a result of some seriously targeted advertising spent by FOX, which has most certainly increased the programmes online visibility among its target audience. By matching users with characters, many ‘Tinderites’ have been paired with the eponymous Mindy, who’s personal profile looks to have been written by a stone-cold, unfeeling ad-man:

“Tiny doctor in a big city looking for love, friendship, or a donut that’s so good it’s spiritual. I’ve got a Reese Witherspoon personality, a Nicki Minaj body, and Frank Sinatra eyes (they turn blue in the summer, I swear). Looking for the Channing Tatum to my “girl from Step Up.” Swipe right if you like a high-powered firecracker of a woman who has it all but only recently figured out her DVR. To see more about me, tune-in to THE MINDY PROJECT this Tuesday at 9:30/8:30c on FOX.”

This however isn’t the first time Tinder have combined TV with online love-matching, having advertised virtual hook-ups with the stars of Suits in the summer last year.

What’s slightly jarring is that Tinder have had a number of well publicised issues in which users were engineering fake profiles and matches between one-an-other, subsequently leaving many open to persecution and harassment. Although some online sources seem to think the TV partnership has helped alleviate some of the bad press around them, however I’m not so sure – feels like they have just opened themselves up to further debate around cyber security and its real world consequences.

What I’m rooting for however is a UKTV Gold partnership in which young nubile 22 year old single ladies can ‘get their freak on’ with the likes of Compo from Last of the Summer Wine.

OMG, that would be totes amaze. 4 days ago  |  ALL, Cause Related, Celebrity, Inspiration, Off the Record, Technology